Two very fun things happened the other day when I went up to the new farm property in Bangor.

The first has to do with the post office there. This is the view from the entry to the PO. It is in a modular building. 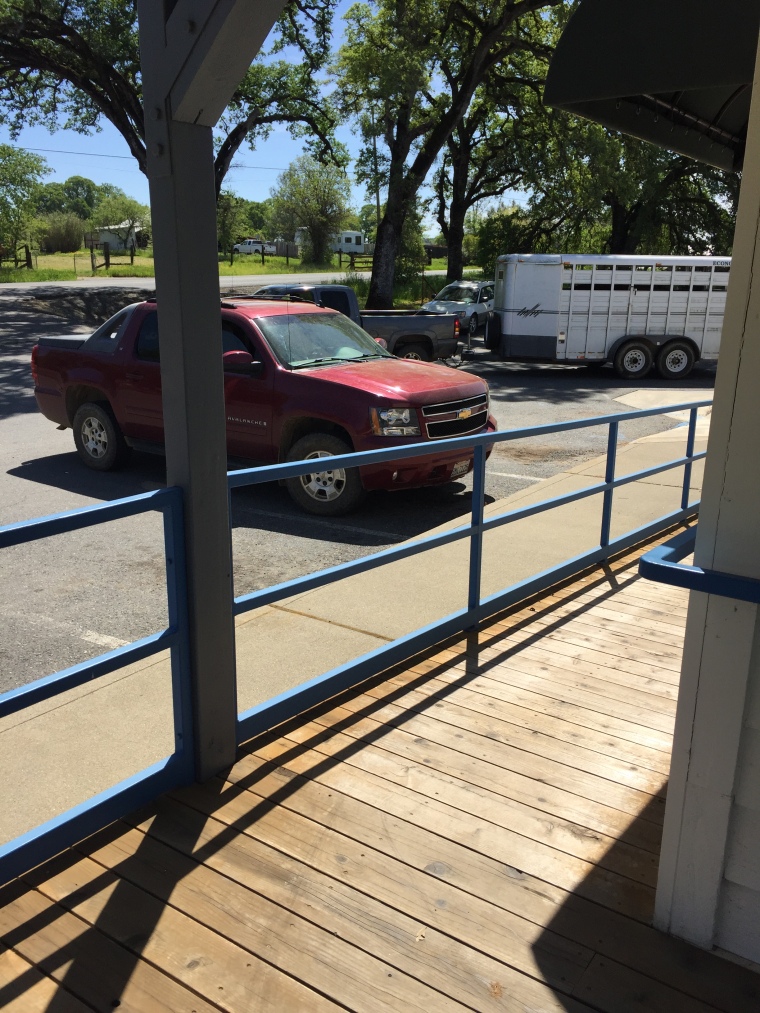 I had gone there to get myself a Post Office Box. When I got there I found a note on the door that said the office was closed for lunch. It would be open again at 1:30, about a 45 minute wait. So I got a snack at the Bangor Grocery Store across the street—about a 500 square foot store with a nice young man named Nikita behind the desk. As I waited in the post office parking lot, I noticed that all the people who came to check their mail (about 5 vehicles, I think) were driving pick up truck like rigs. The last one was the one with the cattle trailer in the picture above. There were beef cattle in the back, and a lady driving the truck. You can just see my Subaru under the tree on the other side of that rig. I felt quite at home; at least, I was driving a four wheel drive vehicle and it wasn’t really clean!

When I got into the counter in the Post Office, I met Marjorie. She is about my age with long grey hair in a pony tail—definitely a 60’s survivor. She was a little suspicious of me at first, I think. But when I got closer she probably noticed that I had a Leatherman on my belt, so I must be all right. We started to fill out the information for my PO box rental but she sent me back to the car to get my vehicle registration as part of my ID to get the box.

When I got back inside another lady was talking to Majorie. I found out her name is Nona. She was talking to Majorie about a 1400 pound sack of oats someone had left with her (I think Nona might run the local feed store.) Anyway she had to get rid of the sack because there were rat droppings around it. She said the feed is perfectly clean so she wondered if Marjorie’s husband would like to have it for his horses. As they discussed this, the lady who was driving the truck with the cattle trailer came in. She was younger than me, dressed like a ranch owner and exuded confidence. All four of us starting talking about cattle, horses, and dairy cows. The rancher had just sold a bunch so she didn’t need the oats for finishing the cattle, Marjorie wasn’t sure if her husband would want it for the horses, but I took Nona’s number in case Todd might like it for the dairy cows. This was a great meeting of four ladies in a country post office! I loved it! I would never have been part of such a conversation in most of the post offices I have been in.

Then I went back to my car and found that I had a text on my phone. That text was my high for the day! Here’s the back story. Just about a year ago I gave away my horses. Tim and I had moved off the farm, my mom was sick in a nursing home, and I could no longer spend time with the horses. I had given up riding when Mom took her turn for the worse a year earlier. She needed 24 hour companionship. I couldn’t give her that and ride. So the horses had been idle for more than a year. I had been struggling for more than two years about what to do about the horses, especially Santo. Santo was my dream horse. I had waited 25 years for him, but that is a different story. After much agony I had decided to give the horses to someone who would love them and use them. The young lady, Karah, who had been taking care of them for me found what seemed to be the perfect family for the horses. So last year about the 1st of May I took Santo and Jack to Lynda and Jeremy. This was one of the hardest things I have had to do with my horses, but I was content. The Lord seemed to be in it.

Then a month or so later, Lynda got pregnant. She and Jeremy decided, wisely, that it was not a good time to have horses. I was so confused. I didn’t know what to do. Then Jeremy said that he would find homes for them, if I wanted him to. He did that. Jack is in a wonderful home where his new owner is helping him to become the horse he was created to be. Santo, however, got killed in a horse trailer accident on the way to his new home.

Again, I was crushed, and broken hearted.

When I gave the horses to Lynda and Jeremy I gave them all the tack I had for them, too. Santo’s saddle had been hand made for him and me. I asked Lynda to keep the saddle for me if she ever had to give up Santo. When she told me about his death, I was too shaken to even think about the saddle. Later when I asked the Lord if I should ask her about the saddle, He said, “no”. I actually asked him several times over the last few months if I should ask Lynda about the saddle. Each time the answer was the same.

Now I am living with some friends in California, helping them to move their farm to a new location where horseback riding would not only be possible, but fantastic! There are lots of horses around the new farm. Todd keeps saying that the Lord has horses in my future. So I asked Him again if I should ask Lynda again if she still had Santo’s saddle. This time the Lord said, “yes”. I sent her a text telling her I was on a new adventure in California and may have the opportunity to have horses again. Did she know what happened to Santo’s saddle?
Her text back to me is what I read when I got back to my car. It said “So exciting! Yes we do! We have everything of Santos to give back to you😀”

Wow! I wrote this back to her: “Thank you so much. I will come get it. I think the soonest I will be there is next month. We are in the process of selling Grace Harbor Farms the dairy to Tim’s son. I am staying with some precious friends, Todd and Sherry, I have known for 40 years who are moving their farm from the Sacramento area to the hills not far from Oroville where the big dam crisis was a few weeks ago. The new farm will eventually be a place where people come for prayer for healing for wholeness for Jesus. I am so excited to be part of it. Tim has been commuting back and forth and will continue to do that until GHF sells. Right now the farm has cows goats and chickens. We will be adding riding horses and draft horses too, we hope. Todd has a lot of experience with draft horses. I am so glad to hear that you have Santo’s stuff. I still grieve for him. It will be comforting to be back in his saddle some day!! I just can’t express the joy that gives my heart. Blessings to you and your precious family. I will be in Whatcom county in May. My grandchildren have a concert on the 21st, I think.”

I am blessed, beyound measure.

Oh, and I did get the Post Office Box. It is number 11. Country town. I love it!

I am blessed, beyond measure. 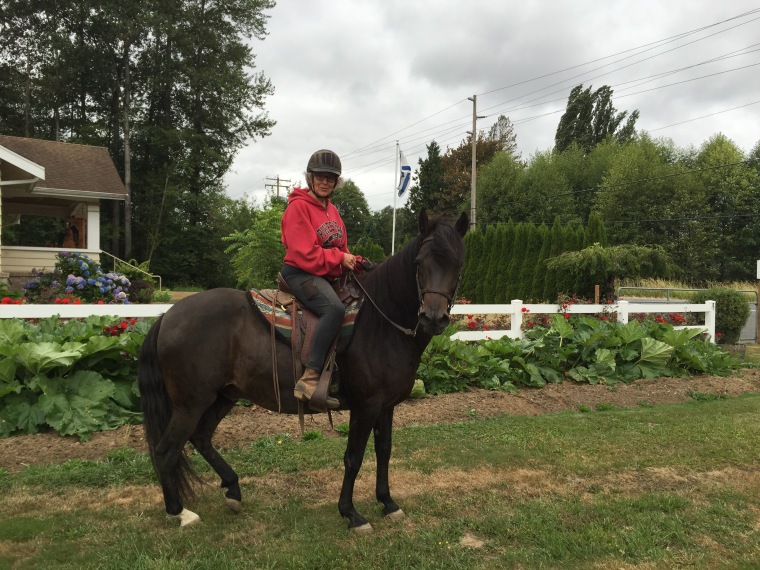 This was my last ride with Santo.